on Jul 19, 2022
At Allison’s two-month checkup, her mother told me Ally slept only for three-hour stretches at night. Shaya confided that getting up so often was wearing her down and making it hard for her to be patient with her other two young children.

I asked Shaya if she was still swaddling Ally at night. She wasn’t. “I stopped about a month ago because the nights have been so warm and she always gets out of it!” I suggested she dress Ally in just a diaper, wrap her tightly in a larger blanket that could be securely tucked around her, and play some loud white noise in her room. The next week Shaya reported the good news. Allison, now tightly swaddled, was sleeping on her back for eight hours every night, without interruption.

For most new parents, a good night’s sleep is the pot of gold at the end of the rainbow, shimmering in your sleep-deprived mind like a mirage. Newborns sleep in such short dribs and drabs that we should never brag we’re “sleeping like a baby.” It makes much more sense to say we’re sleeping like a bear, or a ditch digger, or, better yet, like a new parent.

Why don’t babies sleep more? Your baby actually sleeps quite a bit; however, nature could have been a teensy bit more considerate about helping your baby choose when to enjoy his sweet dreams. Most newborns distribute their snooze time pretty evenly throughout the night (and day).

Mothers around the world usually take the erratic timing of these sleep periods in stride. Many years ago, Dr. T. Berry Brazelton reported that babies in rural Mexico also had evening fussy periods, just like our babies. However, their mothers were amused rather than upset by this, joking that since adults gab all day long, nighttime was a baby’s turn to talk.

Anthropologists observing the !Kung San of southern Africa found their babies woke as often as every fifteen minutes. Their moms responded by pulling them to the breast for a little snack. Usually, they would fall back asleep in seconds.

In the U.S., most parents prefer to let their newborn sleep in a bassinet by their bed. For the first few months of life, your baby will likely request the pleasure of your company for a meal every two to four hours throughout the night. Bottle-fed babies often sleep a bit longer, because formula turns into big curds that sit in the stomach longer than the easily digested, tinier curds of breast milk.

I’m sure it’s hard to believe right now, but your baby’s early-morning feedings may turn into some of your sweetest memories. Those beautiful moments—when all noise and commotion are stilled—may make you feel like you’re floating in a cloud suspended in time. Gretchen, mother of three, said, “Our two-month-old, Julian, will be our last baby, and as crazy as it sounds, I look forward to nursing him in the middle of the night! It’s the only time when we can really be alone, and I get to enjoy my delicious little boy in peace and quiet.”

All babies have sleeping and waking cycles. If you’re like most new parents, your goal is to get your baby to do his longest sleeping at night and be most awake during the day.

But, exactly how long should your baby sleep? On average, babies snooze fourteen to eighteen hours in a twenty-four-hour period. That might sound like a lot but it’s broken up into little snippets, slipped between short stretches of wakefulness. In effect, it’s like being given a thousand dollars—in pennies!

As you can see in the sleep pattern graph, during your baby’s first weeks of life two-thirds of each day will be spent asleep (gray areas). The average infant takes naps lasting two to three hours alternating with hour-long awake-breaks (white areas) for feeding, fussing, and some alert time. Initially, your baby’s longest stretch of sleep will probably be about four hours.

By three months, your baby will still sleep fourteen to eighteen hours a day, but the awake time (white areas) will join into longer periods of wakefulness, and sleeping (gray areas) may extend for up to six to eight hours.

During these initial months, your baby’s brain gets better and better at dividing the twenty-four hours of the day into three main activities:

Awake time—to eat and learn about the world

Both babies and adults have two different types of sleep (and I don’t mean too little and none). Quiet sleep makes up fifty percent of your baby’s slumber. It’s when he’s out like a log, his breathing easy and regular, his face still and angelic. During quiet sleep your baby’s muscles are actually a little tensed; he’s not floppy like a rag doll. 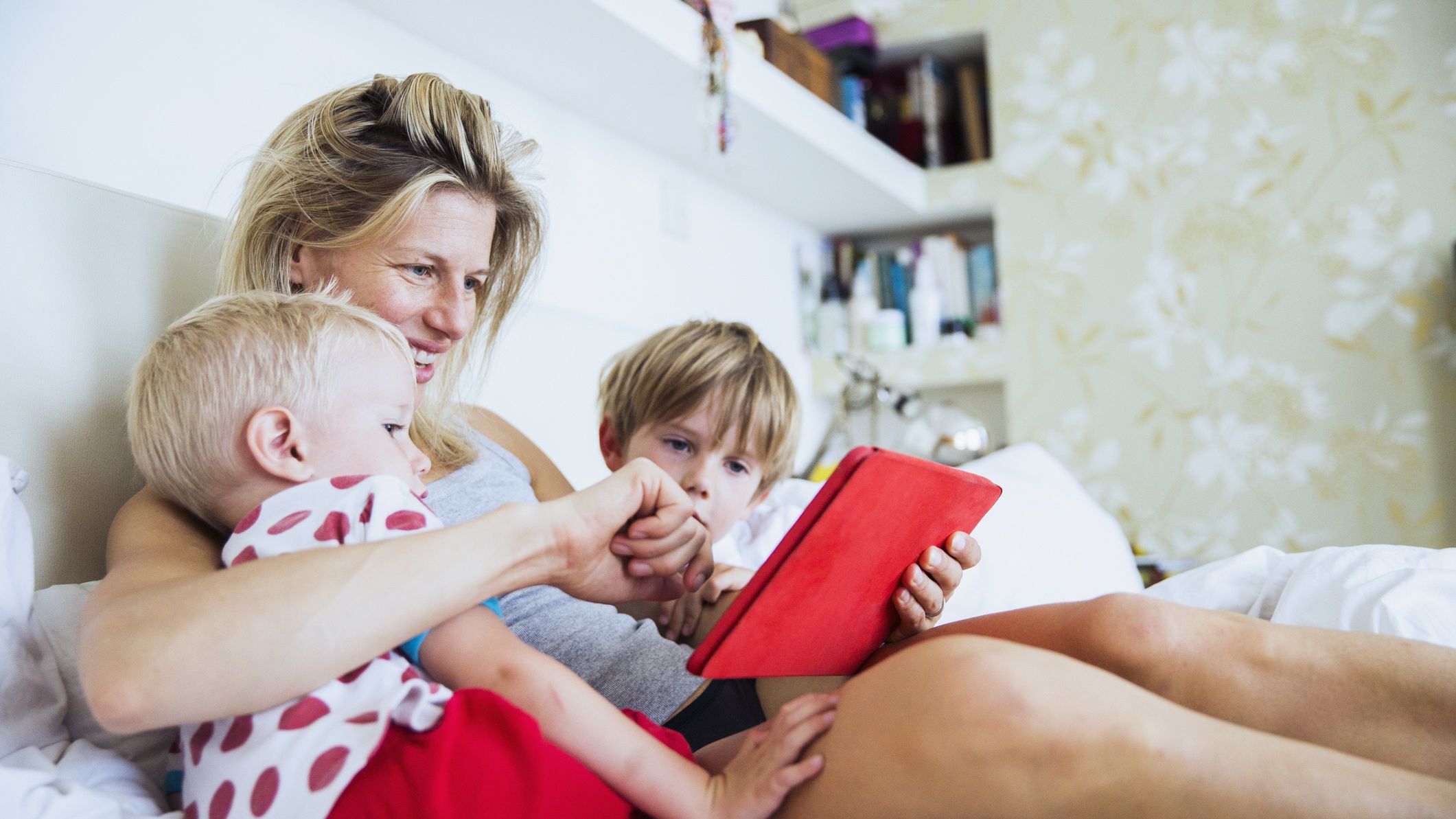 The other fifty percent of your baby’s snoozing consists of active sleep. This sleep is characterized by sudden bursts of brain activity called REM (Rapid Eye Movement), and it occurs between periods of quiet sleep. REM sleep is when your baby’s dreams are spun and his deep memory centers organize all his new experiences of the day. In active sleep, your baby has irregular breathing, sudden twitches, limp dangling limbs that feel like overcooked spaghetti, and, most spectacularly, he makes tiny heart-melting smiles. Contrary to myth, these grins are not caused by gas; rather, your baby is practicing what will soon become his most charming and powerful social tool—his smile.

Adults enjoy a full two hours of REM when we sleep. By comparison, your new baby revels in almost eight hours of REM every day. Why do babies have so much more REM than we do? No one knows for sure, but one theory posits that they need much more time to review the day because so many experiences are new to them. It’s as if their brains are saying, “Wow! So much new stuff today, and I want to remember everything!” By comparison, most of an adult’s day is so routine that our brains fast-forward through this period of review, as if to say, “I can skip all that. I know it already.”

Sleeping obviously is not a time of alertness, but it’s not “coma” time either. You are aware of many things around you while you snooze. For example, you probably have no trouble hearing the phone ring in the middle of the night and even when you sleep on the edge of the bed you rarely fall out of it.

Babies, too, receive a constant flow of information from the world around them while they slumber. That’s why your baby may experience their still bed and the extreme quiet of your home as disturbing understimulation.

The waves of quiet and active sleep that your infant moves through take place within larger cycles of deep and light sleep. These repeat, like the tides, over and over again, all night long. Your baby cycles between deep and light sleep about every sixty minutes. Infants with good state control and mellow temperaments can often stay asleep during their lightest sleep, and even if they wake up, they usually fall right back to sleep. However, babies with poor self-calming abilities and challenging temperaments often have trouble staying asleep when they enter their light-sleep periods. During this phase of sleep, they may be so close to wakefulness that the added stimulation of hunger, gas, noise, or startle may be enough to rouse them to alertness or even agitated crying.
Older Post
Newer Post
Close