EAN, move a wee bit east,” requested the town clerk as he sat at one end of the high-backed bench before his fire on a chilly autumn evening. “You’re taking too much room. You have more than your share of the seat.”

But Jean, his wife, had just got her knitting into a tangle, and was not in the best of humor. So she declined to move an inch, or to attend to what her husband was saying.

“Jean,” said he again, “move a wee bit east. It’s not right to sit so selfish. I’m at the very end of the bench, and here you are with your elbows digging into me. Sit a bit east, do you hear?” And when she did not respond, the town clerk gave his wife a rude shove.

“No such thing as east!” shouted the town clerk. “Will you not believe the sun?”

Then he affirmed in a loud voice that, as the sun 36went around the earth every day and was always rising every moment somewhere in the east, therefore, everywhere was the east all over the world. So he hoped his wife would not make a goose of herself and talk nonsense.

Jean now rose to her feet, and said he did not look at the matter in the right way at all. As for the sun, it was all the time setting somewhere in the west and doing it every moment. Therefore, everywhere was west, and she trusted her husband would not be so foolish as to mention east again.

He shook his head and was going to reply, when she began to run around the table to show how the sun went, at the same time crying loudly, “West, west, west!”

This made the town clerk very angry, and he got up and ran around the table in the opposite direction, yelling, “East, east, east!” to show how he thought the sun went.

Yet it only ended by their getting extremely giddy and banging their heads together, a thing which hurt very much, and did not improve their tempers, or help the solving of the difficulty, you may be sure. 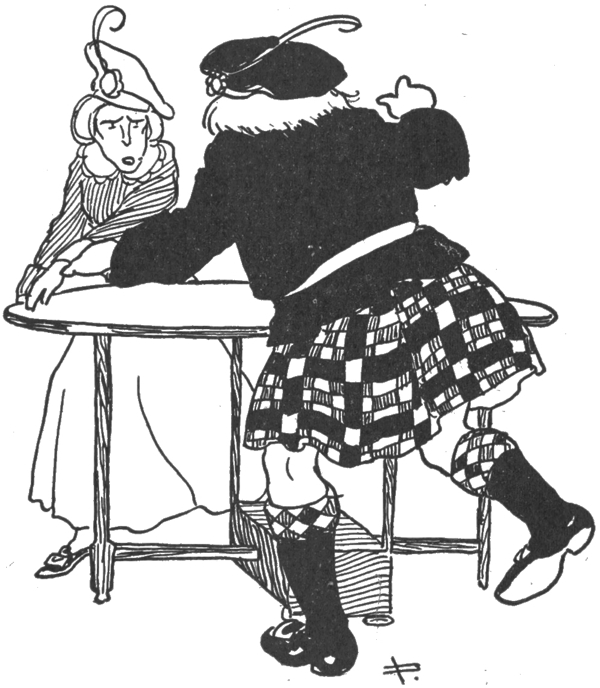 The town clerk and his wife agreed in one thing, which was that the question was of too deep importance to be left unsettled. So they went to the grocer, who had a good-sized house up the street, and Alexander Jones went with them. They told the grocer about their dispute; and the grocer, and the grocer’s wife, and the grocer’s maiden aunt, and the grocer’s wife’s youngest married sister, and the 38grocer’s wife’s youngest married sister’s little girl were all much interested. But one took one view and another took another, and they all ran around the table, some this way, crying, “East!” and some the opposite way, crying, “West!” to show how the sun moved, in their opinion. It only ended in their getting extremely giddy, and banging their heads together, a thing which hurt very much and did not improve their tempers or help to solve the difficulty.

They all agreed in one thing, which was that the question was of too deep importance to be left unsettled. So the whole company, including Alexander Jones, went to the home of the mayor. It faced on the market-place, and was the largest house in the town. They told about the dispute with all the ins and outs of the matter; and the mayor and the mayor’s wife, and the mayor’s favorite uncle, and the mayor’s oldest nephew, and the mayor’s oldest nephew’s little boy were all much interested, to say the least. But one took one view, and another took another view, and they ran around the table, some this way, shouting, “East!” and some the opposite way, shouting, “West!” to show how, in their opinion, the sun really moved. It only ended 39in their all getting very giddy and banging their heads together, a thing which hurt and did not improve their tempers or help to solve the difficulty.

They all agreed in one thing, which was that the question was of too deep importance to be left unsettled. So the mayor called a meeting of the whole populace in the town hall. The people assembled, and Alexander Jones was there among the rest, and the only persons not there were Peter the watchman and his sister Jessica. Then the mayor told all about the dispute, and everyone was naturally much interested. But one took one view, and another took another view, and they all wanted to run around a table to show how each thought the sun moved. Here, however, a difficulty arose, for, alas! there was no table in the town hall to run around, and what were they to do? They were not going to be balked by a trifle like that, not they. So they requested the mayor to stand in the middle, and let them all run around him, each in the direction he or she pleased.

But the mayor objected strongly. He said it would make him dizzy to see some folks going one 40way around him, and some the other. “I would certainly be sick,” he declared. “Therefore, I suggest that Alexander Jones be placed in the middle. Yes, why could we not run around him? Better make use of him, he is so stupid and says nothing. Besides, I want to run around with the rest of you myself, and why should I be cut out?”

“No, no, no!” cried the people, “Alexander Jones is too small, and we should tread on him. He would not do at all.”

They insisted that the mayor must do as he had been asked. Hadn’t they only the other day given him a gold badge to wear, and he must make them some return for it, or they would take it away. So the poor man had to give in, but he insisted on having his eyes bandaged, and also on having a chair to sit in. Otherwise, he knew he would be sick. Then they bandaged his eyes, seated him in a chair, and began to run around him, some this way, crying, “East!” and some the opposite way, crying, “West!” But they only got very giddy, and banged each other’s heads, a thing which hurt and did not improve their tempers or help solve the difficulty. Worst of all, just at the end, when they could run no longer and were quite out of breath, Eliza MacFadden, the fat widow who kept the candy shop, fell plump against 41the mayor, and sent him and his chair tumbling to the floor.

The mayor pulled the bandage off his eyes in a towering passion and declared that something must be settled there and then. He threatened, if they did not agree, he would put a tax on buttons, which was rather clever of him, for everyone, old and young, male and female, wore buttons, and would feel the tax. But he himself would be affected by it less than anyone else because he wore a robe, that instead of being buttoned was fastened by a buckle at his neck, and by a jeweled girdle around the waist.

Now the town clerk addressed the people, and said: “We must avoid this button tax at all hazards. Let us devise some way to solve for all time the terrible riddle which gives us so much concern. I propose that we call in from the street Peter the watchman, for he is up and about at all hours, late and early, and would know more than most about the sun’s movements. Yet, if we ask him, we must also ask Peter’s sister Jessica. She does the mayor’s washing and is a person of importance in the town. Peter would certainly decline to come into the hall unless she came with him.”

42This was, indeed, most provoking for me, because there was no room left in the town hall for another person, and two would have to go out, in order to admit Peter the watchman and his sister Jessica. I was the first to be put out, for I was a stranger and only present in the hall out of courtesy. Next they turned out Alexander Jones, because he was so stupid and said nothing. Thus it happened that I never knew what was the decision of the meeting. But perhaps you wonder why Alexander Jones was so dull as to sit still in a corner and say nothing. Yet how on earth could he do anything else? Alexander Jones was the town clerk’s